where $S$ is the external substrate concentration,$\mu_{max}$ is the maximum growth rate, $k_{M}$ is the half-saturation concentration, $Q$ and $Q_{min}$ are the measured and minimum quota of the limiting substrate, resp., $\rho$ is a dimensionless scalar relating to diffusion, and $S’$ is the minimum resource concentration required for maximal growth. Note that I’m ignoring any explicit treatment of maintenance requirements for clarity.

Before we discuss the foundations and merits of these wildly different views, I will mention the obvious: these are by no means the only descriptions of substrate-limited growth (c.f., Westerhoff and probably hundreds of elaborations and witches brews of each), but that’s well beyond the scope of this rant. Also, I won’t say too much more about Droop for now… I haven’t put enough thought into how this all manifests in terms of the internal quota. I’d just mention that $Q_{min}/Q$ is… well… awful to think about.

Anyway, you may have noticed that the Monod kinetics model is structurally identical to the Michaelis-Menten model of enzyme catalyzed reactions, so let’s critically evaluate whether the two systems they describe are fundamentally similar enough to be captured by a single model. Consider first that even the Michaelis-Menten model was analytically derived from a fairly radical simplification of otherwise complex reactions. The hyperbolic function describes the rates of formation of one or more chemical substrates to one or more products, catalyzed by a well-mixed, monodisperse enzyme catalyst suspension, held at steady state. In its most basic form, the reaction consists of two reversible steps - a step which binds free substrate molecules to an unoccupied enzyme catalyst, forming an enzyme-substrate complex, followed by a step which dissociates the product from the complex forming free product molecules and freeing up the enzyme catalyst (sometimes requiring another step to restore it to the active conformational shape). The rate constants can be derived from mass action and from collision theory, where a substrate-enzyme collision with insuficient energy to overcome an energy barrier results in no binding, or a sufficiently high energy collision between a product and the now-unoccupied enzyme again forms the enzyme substrate complex. Clearly there is a concentration dependence on both the forward and back reactions, as well as many other dependencies (e.g., temperature, pressure, pH, and chemical composition of the aqueous matrix). Anyway, one quickly realizes how oblique even this 2-step description is, considering the multitude of possible sequences of conformational changes associated with each of possibly multiple protein subunits, a dizzying array of poorly understood post-translational modifications, multiple substrates each with their own specificities, multiple intermediate reactions, ping-pong bi-bi, blah blah, etc., etc., ad nauseum. All this to say that replacing “enzyme” with “cell” is quite a leap, so it’s less than obvious that cellular growth “kinetics” should necessarily be hyperbolic. 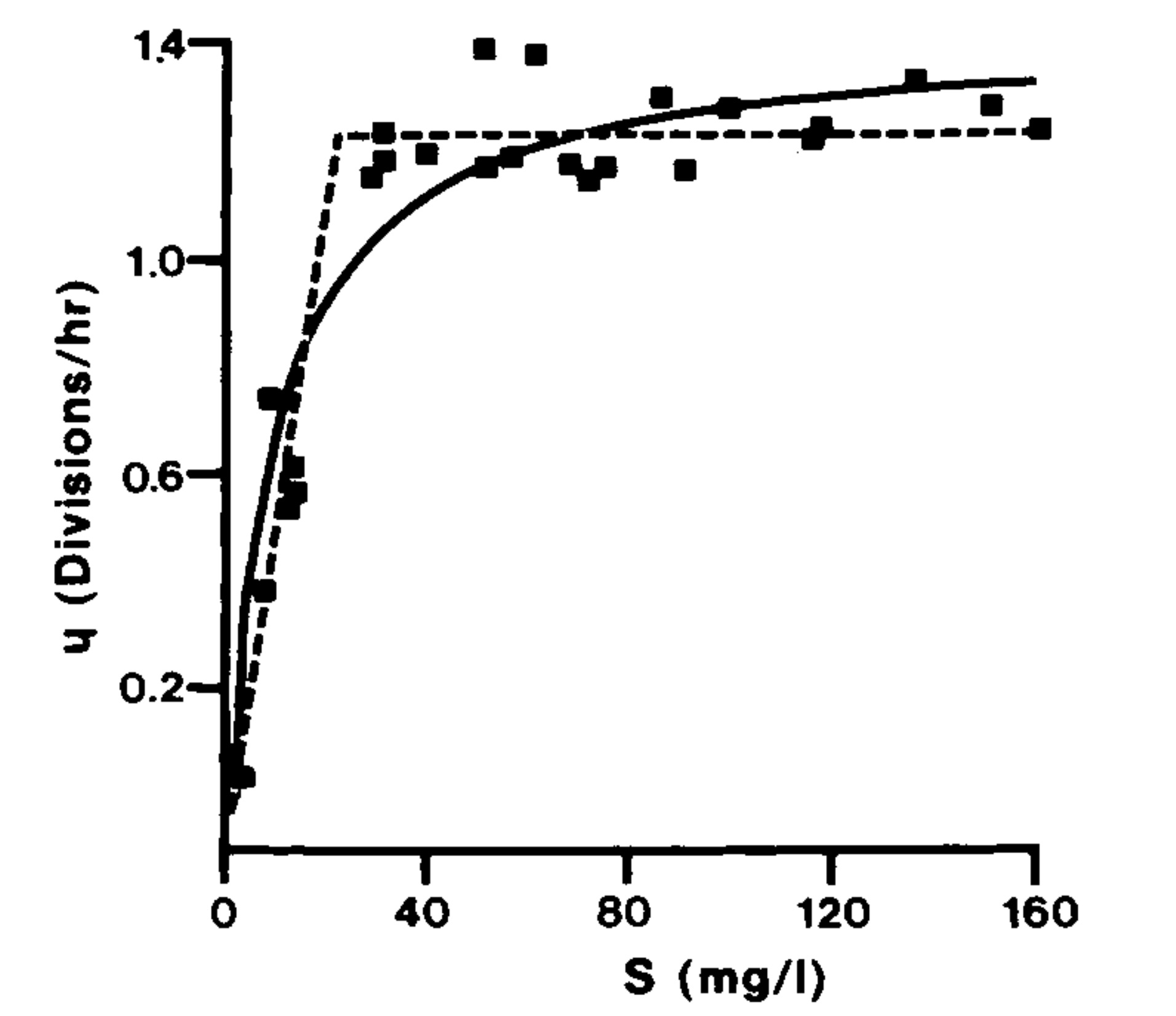 Nevertheless, Monod saw, or wanted to see, a resemblance of Michaelis and Menten’s in vitro reaction kinetics to his own in vivo measurements of E. coli and M. tuburculosis growth on glucose as a limiting substrate, stating in his seminal 1949 paper: “Several mathematically different formulations could be made to fit the data. But it is both convenient and logical to adopt a hyperbolic equation.” But upon closer inspection, as several others would point out decades later, the E. coli data do not appear to be hyperbolic at all. A stepwise linear model, one with a sharp transition from first-order to zero-order, is at least an obvious candidate. The M. tuburculosis data do seem to fit a hyperbolic function, but no discussion of the difference in shape was bothered with in his, or in his critics’ articles. 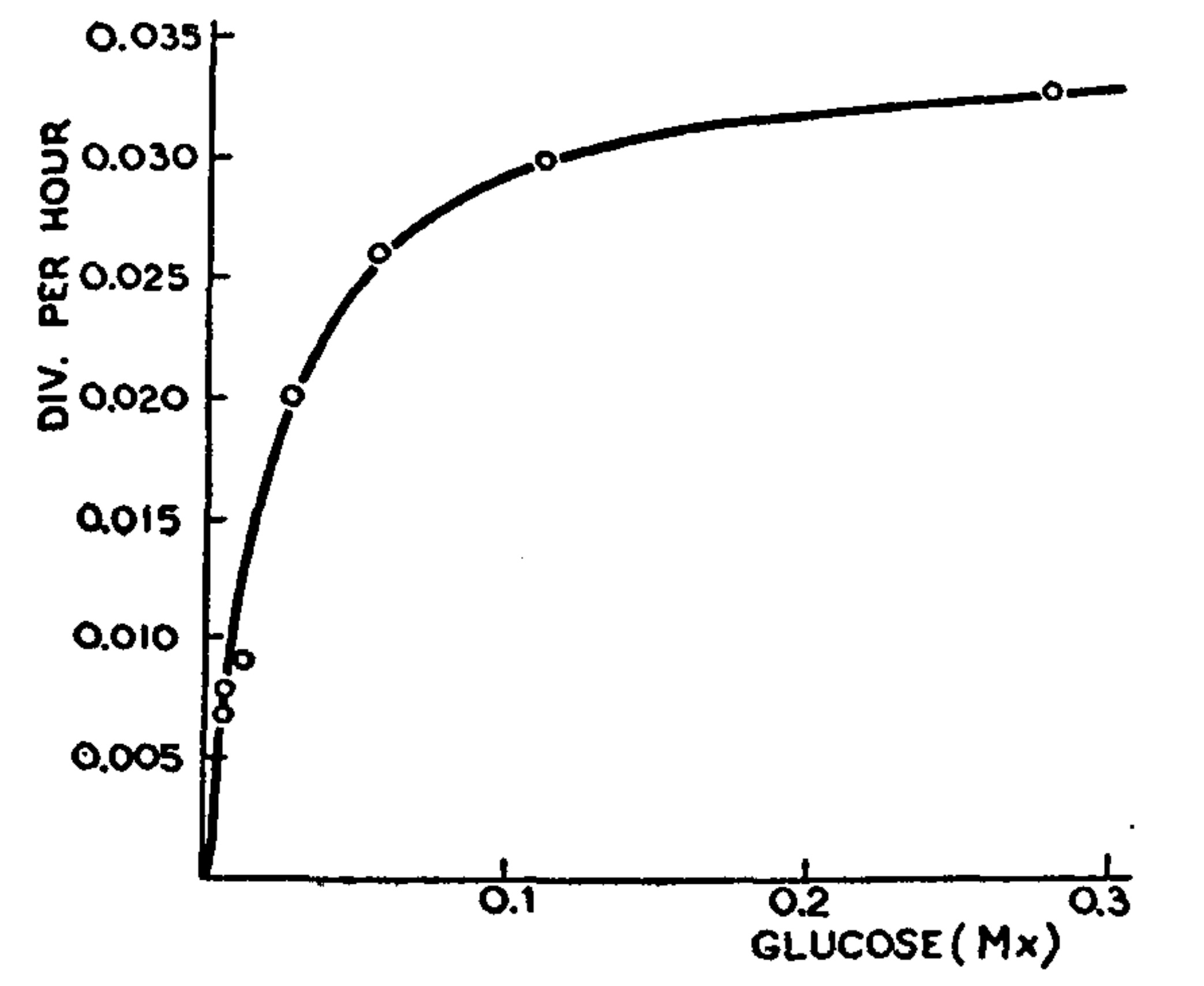 Considering the profound influence Monod has had on biochemistry and biophysics and their various applications in biotechnology, it is baffling that such a glaring inconsistency has been so overwhelmingly ignored for the better part of a century. Evidence in favor of both Blackman’s and Monod’s models can be observed in the literature, with some ensuing speculation about why one or another is right, but none have interpreted the data for what they show: that both are correct under different circumstances. For example, evidence of both shapes can be eye-fit from observations of natural phytoplankton populations (Sommer, 1991) and don’t let the curves fool you!: 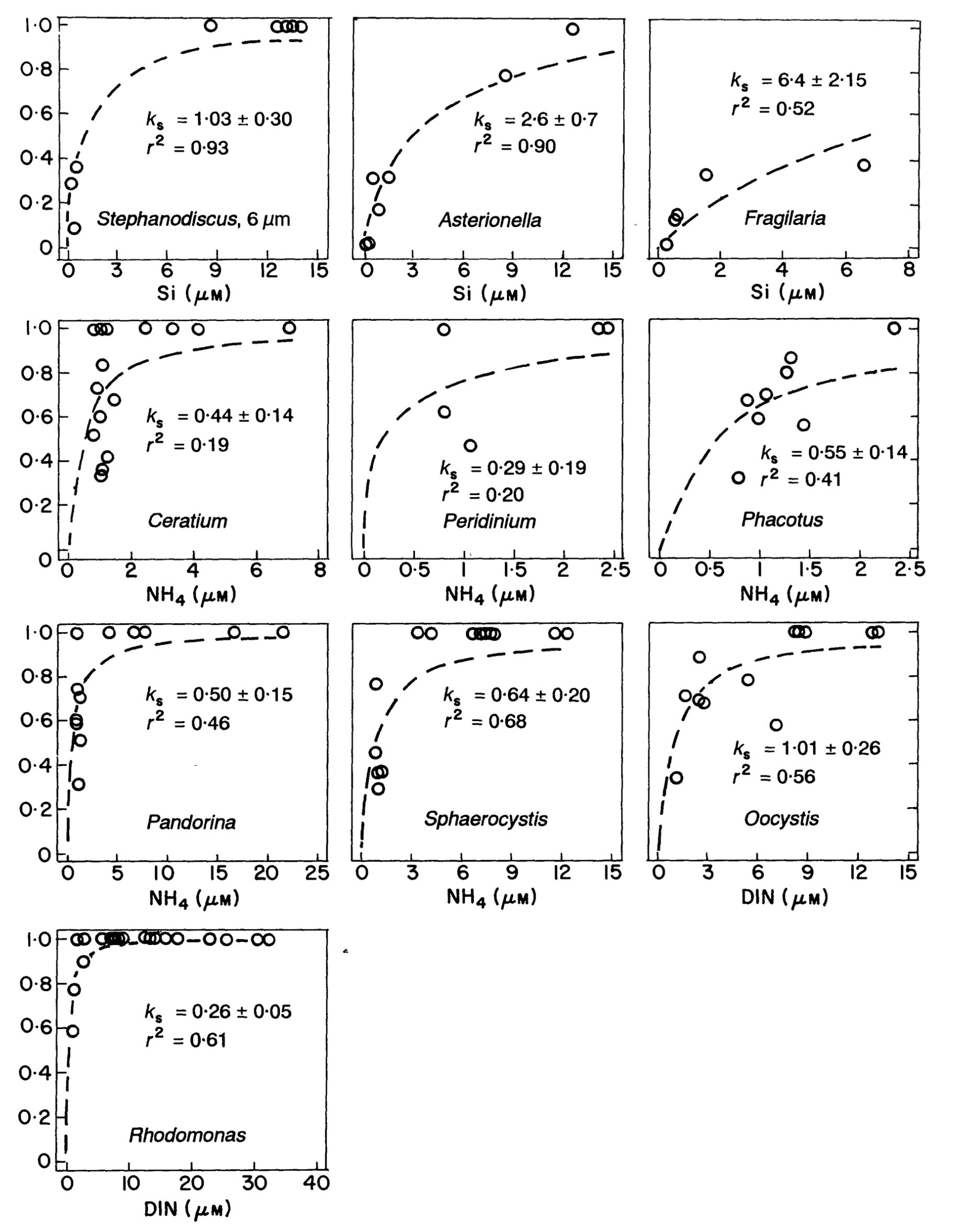 Phytoplankton growth rates ($\mu / \mu_{max}$) as a function of substrate concentrations (Sommer, 1991). It’s ammusing to me now that the article was focused on a comparison between Droop and Monod, considering all these perfectly piecewise-linear shapes that several taxa take on…

In our recent article, we provide a possible mechanism with can reconcile both of these views. In that model, both outcomes are possible: growth as a stepwise-linear function (left column of panels) or growth as a hyperbolic function (right column of panels) of the external substrate concentration. You’ll have to actually leaf through the paper but the TL;DR summary is that the shape of that transition - from diffusion limitation to growth limitation - depends on the catalytic rate of the transporter and the available cell surface area. If the optimal number of transporters to be expressed at some arbitrary external substrate concentration requires more of the cell surface than is available, the resulting growth rate falls on a hyperobola. Otherwise, transporter abundances can be regulated in such a way that the entirety of the diffusive flux is captured (1st order linear) up until a critical substrate concentration $S^{*}$. Above $S^{*}$, the substrate is sufficient to maintain maximal growth.

Schematic of steady-state nutrient acclimation. A) – Optimal transporter abundances $n^{*}$ (solid green line) lie at the porter limitation (blue shaded region) boundary. All points above and below this boundary fail to maximize growth rate; for all points below, the uptake rate is sub-maximal; for all points above, some transporters are unoccupied. Over an interval of bulk substrate concentrations $S^{\infty} \leq S^{*}$, this boundary is met with diffusion limitation (orange shaded region), where the catalytic rate exceeds the encounter rate; as concentrations exceed $S^{*}$, the porter limitation boundary transitions to an internal growth rate limit (yellow shaded region), where the catalytic rate exceeds the rate of some downstream reaction. B) – For smaller cells, or for transporters with slower $k_{cat}$, membrane surface area limitation (a special case of porter limitation) may be encountered. In the interval bounded by $S_{SA}^{lb}$ and $S_{SA}^{ub}$, $n^{*}$ is constrained to $n_{max}$ (black dashed line). C) – Growth rates of optimally acclimated cells (solid green line) follow the intersection of two limits: the diffusive limit (purple dashed line) and the internal growth limit $\mu^{G}_{max}$ (black dashed line). These rate limits are, again, bisected by $S^{*}$ with a sharp transition. D) – If surface area limitation is encountered, growth rates in the interval $S_{SA}^{lb} \leq S^{*} \leq S_{SA}^{ub}$ follow a more gradual, hyperbolic transition from diffusion limitation to growth limitation.

Given the conflicting observations, and supposing that our model provides some harmonious explaination for the two shapes, I want to encourage you to not write off Blackman just because hyperbolic functions are mathematically convenient. On my list is to dig up some quantitative proteomics data for M. tuburculosis to see if I can reproduce both of Monod’s experiments. Anyway, thanks for making it all the way down here!!